The Lines of Beksinski - video about artist's drawings. 12:24 min.

Interview with Zdzislaw Beksinski published in Projekt in 1981. 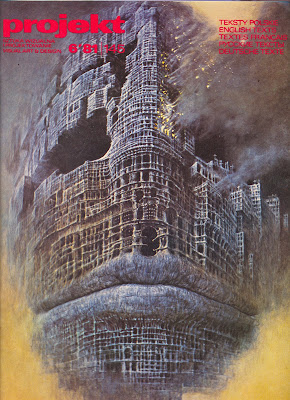 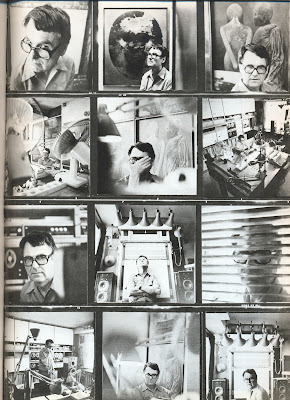 Email ThisBlogThis!Share to TwitterShare to FacebookShare to Pinterest
Etykiety: biography, interview with artist

How to varnish a painting?

Varnishing
What Beksinski wrote about how to varnish a painting? These are again quotations from his correspondence:
"After about three months after completing the picture I cover it with alkyd resin in polymerized oil, ie. LIQUIN (produced by Winsor and Newton).
I wait as long as I can with this procedure, because Liquin must be rubbed very strongly with sharp nylon brush, and if the picture is fresh there is a risk of smudging some colors.
Besides, the later you put it on the painting the slower it tarnishes and penetrates into the picture.
Then it is allowed to photograph the painting, because then it has its surface compensated in terms of glossing.
After a year or better after two years, the painting can be varnished.
I did not use acrylic varnish, and besides, it is not suitable for oil paints (it's such a milk - an aqueous dispersion of acrylic resin).
Varnishing the oil painting requires skills of course, and glossy varnish in principle (if not used prematurely) do not tarnish (become mat) over time.
This does not require preparing any special potions, and I would hesitate even to use them, as the varnishes produced today are at a very good level.
The principle of good damar varnish is its no yellowing and no cracking over time and dissolving in solvents easy, so that any removing of it after years would not damage the painting itself."
And yet another quotation:
"(At the beginning of the 80s) I was experimenting with acrylic painting and carried out some tests. Acrylic painting generally is not suitable for varnishing. Pure acrylic painting is easy to distinguish by the fact that it is mat (unpolished). Although it can be seen some disruption of the opacity in terms of brush strokes, but all of these strokes are mat.
Generally problem of varnishing lies in the fact that the picture painted matt has some color proportions and qualities that would go to hell when it'll gain gloss.
Colors would become more vivid but uglier. This applies to all matte acrylics.
Varnish will not damage them materially, but will change them and could not be removed. So returning to its original state (before varnishing) won't be possible.
The so-called matt varnishes are generally crap, so I do not recommend them."