This is the first entry in the series dealing with the Zdzislaw Beksinski's painting technique. In this section you will learn about paints the artist used. These are quotations from the artist's correspondence (which originate from the eighties of the twentieth century) with his art dealer and friend Piotr Dmochowski. Pardon me my linguistic errors of translation. More posts to come (varnishing, impregnation, priming, mediums, preparing fibreboard). Hope you find it useful.
I paint with Rowney's paints "ARTIST OIL COLOURS" and Talens' "REMBRANDT ARTIST OIL COLOURS", as well as Rowney's "CRYLA - ACRYLIC" and Talens' "REMBRANDT-ACRYLIC".
For each painting I use a certain amount of colors, do not go beyond that.
As for the brushes I use only those that I have and which I could afford. There are better but I failed to buy.
Brushes I use are almost entirely flat and hard, that is, either from pig bristles or nylon. Of course with several gradations of hardness and with various hair length. Minor trims, finishings and small brightenings paint with small number, round sable brushes. But that's just when finishing off the image in just a few places. 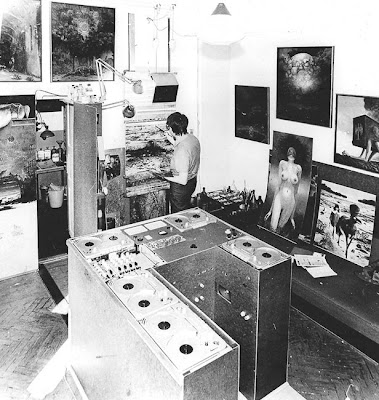 Paints are not divided into red or blue, but into expensive and cheap. Some red are cheap, some blue as well and the opposite too. The same applies to other colors. Next, there are whole "series" expensive or cheaper.
The most expensive paints are "artistic", the cheaper are "for artists", more cheaper are "budget", even cheaper "to study", the cheapest "for schools".
I paint with paints absolutely most expensive (as the series), but when it comes to the colors, I do not go by the price! In Polish conditions, buy them in large amounts, paints in Poland are hard to get, I get them thanks to people. [translator's note: Beksinski wrote this during communist era in Poland).
I am not guided in choosing colors with nothing but imagination and the persistence of what I do to light.  Resign of certain color because it's unstable or can not be mixed with all others or threatens that will respond to hydrogen sulfide from the atmosphere or free fatty acids in linoxide.
The paints produced by good companies are divided into: "absolutely stable", "stable", "stable with limitations" and "unstable". I do not purchase at all paints that are "unstable" even though they are the prettiest. They are produced due to tradition of using certain pigments, but they slowly becoming obsolete.
I have paints "stable with limitations" but never used them (eg: white leaded, Prussian blue etc.) because they hinder the work. Can not be mixed with any other paint but only selected ones, for example they are sensitive to hydroxides etc.. I use "absolutely stable" and "stable" paints only. They are all chemically neutral and can be mixed together in any proportion. Between them both there is this difference that paints "absolutely stable" does not change under any influence over the millennia (ochers, cobalts, iron reds, etc.). However "stable" may slightly fade if they were exposed to the direct sunlight for hundreds of years, or worse, further brightened with white and then fried in the sun.
But what we now call "stable" paints had neither Leonardo nor Ucello and they're so damn resistant to light.
I checked myself red and violet cadmiums (painted in a thin layer) exposing them through a thin window for over two years in direct sunlight and nothing happened - any perceptible change.
Modern chemistry has given us better paints than old masters had. Only the painters are worse.
More damage to painted images causes darkness, especially works with the bright colors and painted with bluish and white.
Dried linseed oil - linoxide (translator's note: linoxid? - the product of oil oxidation) darkens due to the lack of light (as seen for example on the doors painted in white, if it has a calendar hanging on it). There is a conservation technique of lightening old, yellowed images due to holding them in the basement, using the quartz lamp exposure, because darkened linoxyd can get slightly lighter this way (and then darkens again, if there is no light). Because this darkening has a character of yellowing and browning after years, the paintings with brown, yellow and red colors are less exposed to visible changes, than blue, white and steel. And in any case the latter must always be kept in the light - then the changes are less visible.
All this does not apply to acrylics. Pigments are the same, but there is no yellowing. However, not everything can be paint with acrylics and it is mechanically easier to dirt and more difficult to clean. It is simply because acrylic painting is porous and dirt gets in these microscopic pores and can not be removed.
Autor: Bex o 1:27 PM 26 comments: Linki do tego posta